If you were born in the Victorian Era, you would most likely be wearing a corset right now! Most girls started wearing them in their young teens in those days. Victorian times were the heyday of corsets, but to search out their origins, we must go further back in time – to the late Renaissance.

So imagine with me a setting a bit like your local Ren Fest (but less fairies, more unpleasant smells… ok let’s not imagine the smells!) and travel to the French Court. Corsets as we know them today got a big push to fame because of Catherine De Medici.

She’s on my “historical figures that would be fun to cosplay” list because she was kind of a badass (and possibly evil too.) One of the weirder things she did in her lifetime was to put a ban on “thick waists” at court. And a trend took hold. 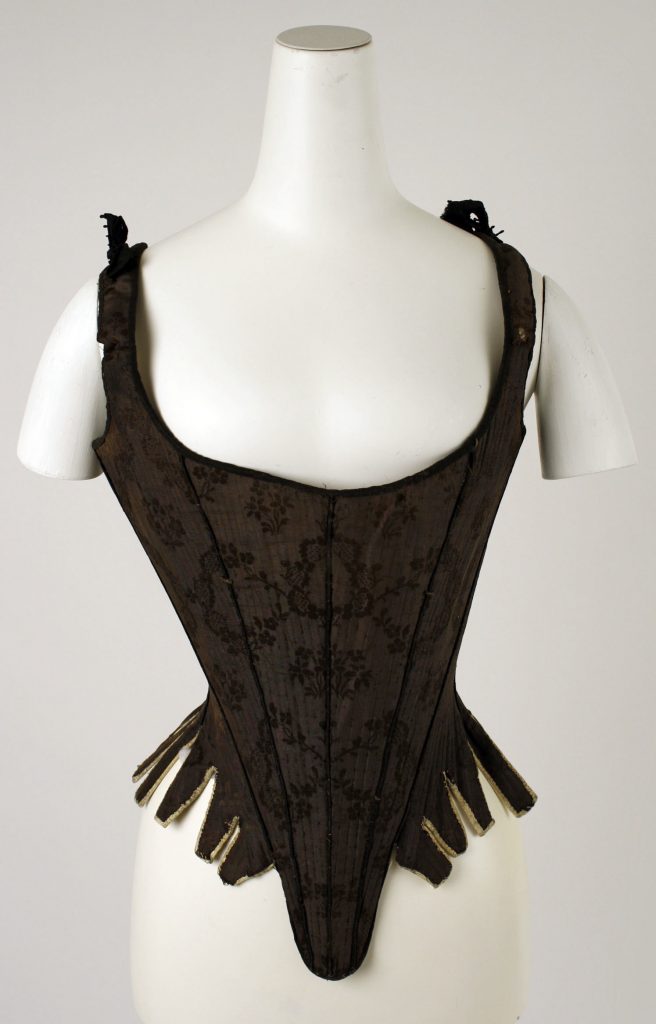 They attempted to give you a torso shaped like an ice cream cone! The illusion was furthered by the style of the dresses women wore. They changed over the years, but they always featured a rather stylized figure. Here’s a gorgeous example from 1770: 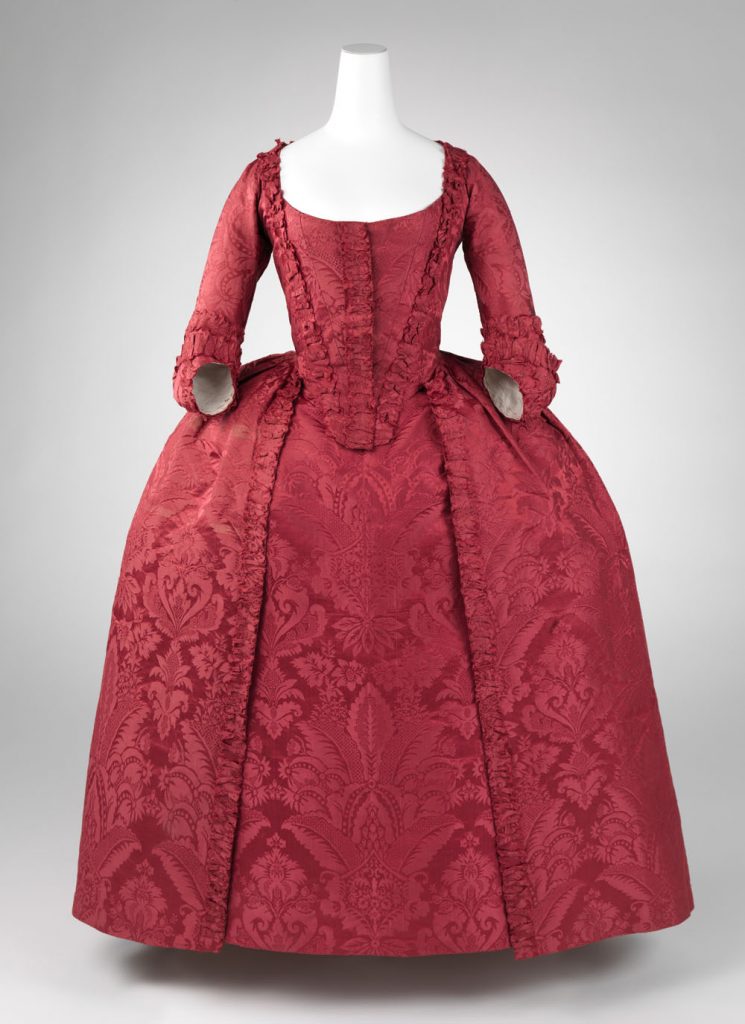 The corset as we know it today came into being during the Victorian era. They had been using the corset for hundreds of years as a foundation garment to help dresses fit and look a certain way. So when the style evolved to have a small nipped waist, and tons of voluminous petticoats, corsets got nice and curvy to help the silhouette.

The Victorian corset started out short and curvy – but when the skirts got more form fitting in the 1880’s, it extended down to shape and smooth the hips and abdomen. My designs are mostly inspired by the 1880s. I absolutely love the silhouette in those days!

In the 1890s (Edwardian era), they made corsets with straight fronts and backs shaped in a way that forced your chest out and your hips back. It made the gowns look so elegant – but it made the corsets rather uncomfortable for your back.

As modern feminists, we would like to think that one day, we decided to be liberated women, and spontaneously burned all our corsets and switched to wearing only practical clothing. But it didn’t quite happen that way! The thing that really made us stop wearing corsets was World War 1. They needed more steel to make weapons/ammunition. So women helped the war effort by giving up their steel boned corsets. We still wore shapewear – like girdles, and lighter elastic corsets for decades after that.

In the 60’s – a slim athletic figure came into style. So exercise replaced shapewear for attaining an ideal figure. And for a long while, corsets were a rare item for those not into historical reenactment or the fetish scene.

Now the corset has come back into fashion – as something we wear for fun! And I’m glad that they have. I’m a mother of two who hates to exercise – so as you can probably imagine, I don’t have an ideal figure according to modern standards! But oh, do I love how I look when I wear a corset. ^.^ 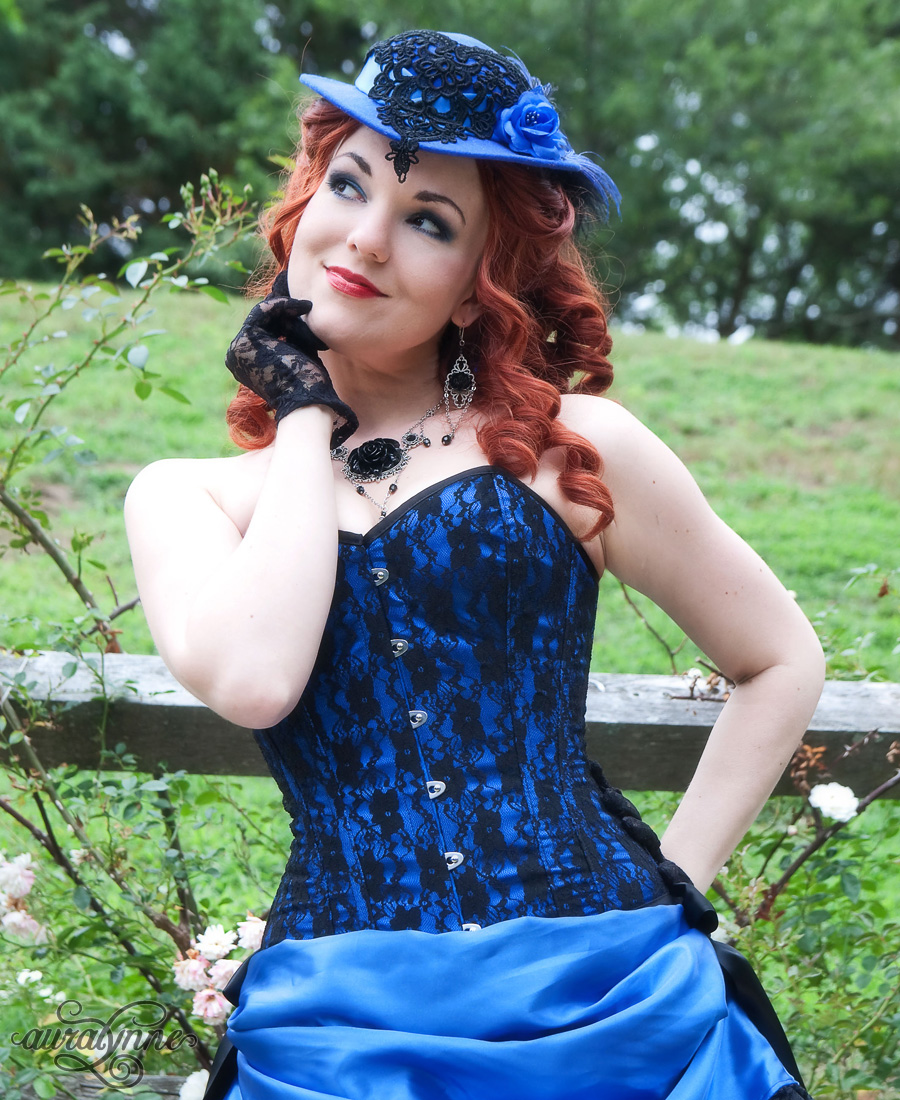 If you are curious to learn more about the history of corsets, may I recommend this book:

I purchased and read it before writing this post to be sure I was dotting my i’s and crossing my ts correctly!  But it turned out to be a fascinating read with lots of interesting pictures.  (The above image is an affiliate link – if you purchase with the link Amazon will pay me a small commission on the sale.  I’ve found some awesomely recommendable things on Amazon over the years – and it seemed that the easiest way to share their images in my blog was to sign up for the affiliate program!  So that’s what I did.  ^.^)