I’m back from Steampunk World’s Fair (my second year attending) and still working on trying to get back into the swing of things!  I did, however, find the withdrawal symptoms were much less advanced this time – possibly because of the Watch City Steampunk Festival happening only one week later?

Last year it was just me (and a whoooole lotta vending stuff) but this year I decided to bring the family and just attend the convention.  My latest opinion on vending is that it involves too much work and too little cosplay!  Although when my children are old enough to tip the scales more toward the “help” than the “hinder” range, I do plan to dip my toes into vending at shows again.  ^.^ 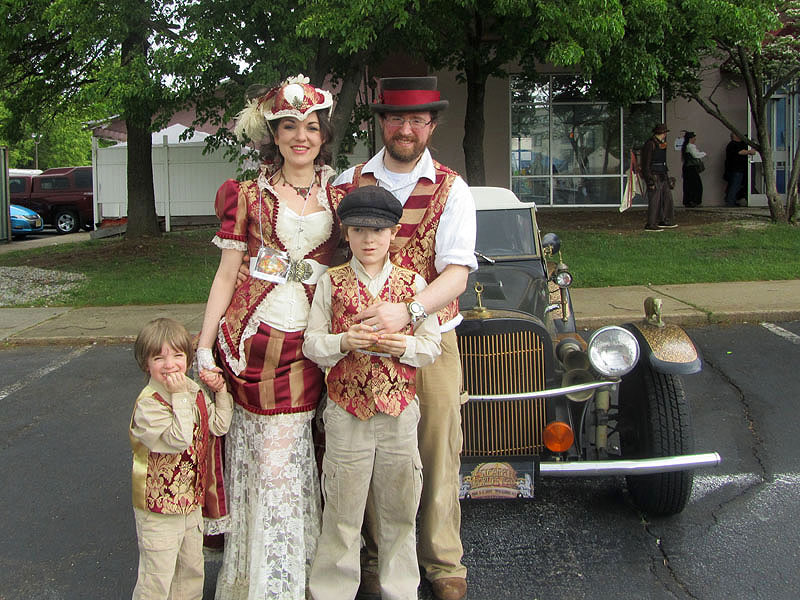 Andi (a family friend) also came with us this year.  It was kind of funny – because the first day, we were all wearing our matchy-matchy Victorian/Steampunk outfits and thus looked quite brightly and happily Steampunk (as you can see in the photo above).  Meanwhile, I had put some things together from my closet to fit Andi, and they were more my standard line of dark and gothy-looking steampunk pretties – polar opposite of the rest of us!  People would see us, go “awwwwwww”, and then they’d see Andi and start laughing – “OMG she is perfect!  It’s the gothy teenage daughter!”  So we went with it – and Andi started posing in dramatically disinterested ways for all the photo moments.

Many thanks to Edward Arneson for this great shot of us!

My favorite quote from a passerby – “The family that brocades together, stays together!”

Saturday night, my favorite Steampunk band (This Way to the Egress) did something awesome.  They teamed up with Emporer Norton’s Stationary Marching Band (who has a very compatible/similar style) and did this crazy long back-and-forth concert.  One would play a few songs, and then they would all join up to play a song together, and then switch to the other band for a few songs.

The key thing about this is – BOTH of these bands play the absolute most amazing dancing music – along circus/vaudeville/swing lines.  And I don’t mean that it’s music that you can dance to – it’s more like you HAVE to dance – not moving your feet/bouncing/wiggling/etc while this music is happening would feel like absolute travesty! 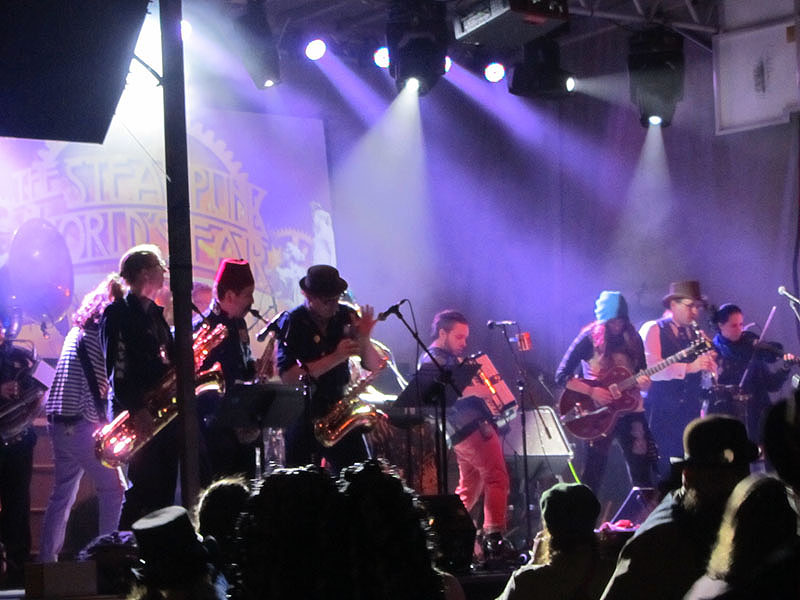 I’ve been to a couple of This Way to the Egress concerts now, and the tragedy is always that it’s over way too soon!  I mean, sure, dancing with that high a level of energy does totally drain you – but OMG the fun!  With both bands coming on to give each other a break, the fun didn’t have to end – at least not until I had thoroughly tired myself out, literally danced a hole in my favorite pair of shoes (anyone know where I can get another pair of black beaded satin ballet slippers??!) and… well, let’s just say – you know that saying, that it isn’t a party until the police get called?  Condition met.  The bands had to finish and unplug at midnight to please someone who shall not be named (who apparently calls the cops on us every year…) but holy crap 2 and a half hours of crazy bouncy dancing!  Yaaaaah!

Sunday is always a quieter day (because after effects of alcohol) but I still like to do the fancy-dress thing.  We didn’t have matching outfits for the kids in those colors, so we did the suspender look for them instead.  And Andi got creative, combining some of my things, with some of her things to put together a cute anime-flavored steampunk look for herself.  Here we all are together: 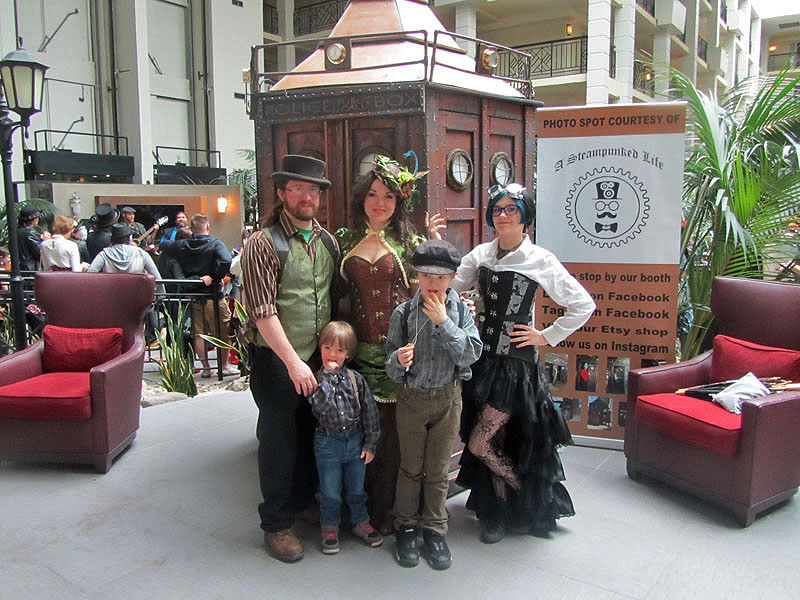 Following is my favorite photo of the trip.  I had said something along the lines of “oh we don’t have any pictures of me by myself yet, can you take one here?” and I’m posing, and then my oldest (Tristan) just decides to jump in front of the camera and photobomb me.  Tristan is autistic, and while he does some strange and unusual things from time to time, photobombing is not typical! 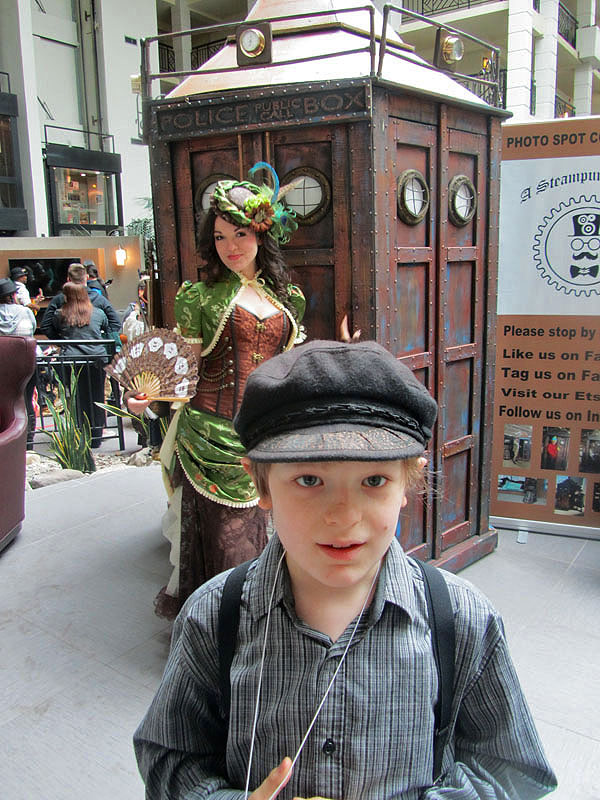 The best and most amazing thing about Steampunk World’s Fair is all the cosplayers!  My stuff is really pretty – and fairly over-the-top – and most of the time I’m one of the fanciest dressed when I go to an event.  At SPWF, I’m just one, of many, many awesome cosplayers (and no where near the best dressed either!)  I absolutely love seeing everyone else’s amazing creativity in motion!

I’d want to finish by posting an album of all the amazing cosplay we got pictures of – but we had camera issues this year.  In the future, we’ll have to pay more attention to tiny sneaky grubby fingers getting too close to our camera lens!

Instead I’m going to provide a link to Babs Who Takes Pictures’ album from 2017 – she always takes great shots!