What is Steampunk, really? I’ve seen a lot of definitions out there. And, for at least 5 years, all of them left me thinking that Steampunk wasn’t for me – until I finally attended a Steampunk festival. It converted me –  instantly – into a raging (let’s face it, rabid) Steampunker!

The thing is, I’d seen so much “Steampunk” over the years – and all that brown and all those gears – well, yes, it’s Steampunk, but it’s not REALLY Steampunk.  It’s not all there is to Steampunk.

Let me explain, lol. If I’m hanging out with someone brand new to Steampunk, and I’m asked to define it, here’s what I say:

“Have you ever been to a Renaissance Festival? Do you know how, at a Ren Fest, you see people in historical costumes, but you also see fairies and elves, because, why not? And you see Medieval and pirates and belly dancers and all sorts of things because it’s all about having fun!

Now imagine that, but replace the Renaissance with Victorian.

It started with books. Sci Fi books with these amazing worlds based on the question, what would the world be like if the Age of Steam never ended?

People read these books, and their imaginations were so captivated that they wanted to see it! And so they created it, in magical pop up events around the world.

For years, I thought Steampunk was all gears and industrial looking accents, and all in shades of brown and ivory. And sure, that is your stereotypically Steampunk look. But – what Steampunk really IS, is this amazing community of artists that are all inspired by the Victorian Era, by steam powered technology, or just generally like to create cool looking things that fit in in a steam powered, Victorian inspired world! You can be a Steampunk, and have a wardrobe that does not contain a single item in any shade of brown. You can be a Steampunk, and have a massive collection of props that do not contain one single gear.

My first ever Steampunk convention was in 2014.  I wore this: 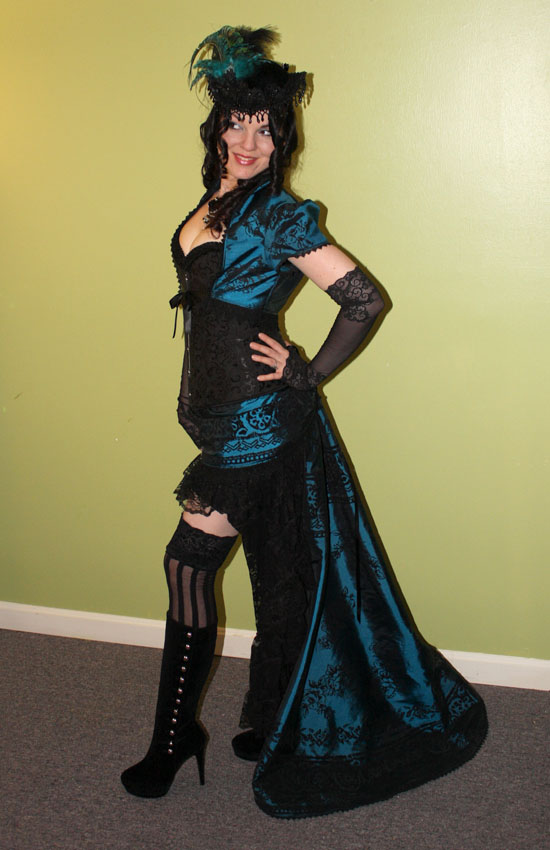 And I thought I was going to stick out like a sore thumb!  I was shocked when I realized that I fit right in.

The truth about Steampunk is, as far as inspiration goes, it’s very nearly a free for all!  The Victorian era lasted for quite a long time (1837-1901) – and most Steampunks also include the Edwardian era (1901-1910).  Aaaaand most people agree that Lovecraftian (H. P. Lovecraft, horror author and inventor of Cthulhu, the winged tentacled ancient god/alien being) ideas belong in a Steampunk universe – and those didn’t come out until the 1920’s!

That’s rather a lot of history – a lot of fashion, a lot of inventions, a lot of styles – to draw from, and combine with things from your own imagination.

What is Steampunk?  It’s a community.  That’s truly the best answer.  And communities are made of people, and we vary!  So while some of us are going to follow the ivory and brown exposed gears aesthetic – not all of us will!

So if you’ve been holding out on Steampunk because you like Victorian things but aren’t fond of the “Stereotypical Steampunk” you see everywhere – stop holding out and come join us!  😉 We’d love to have you!