As promised, here’s the second half of the pictures from the cold and windy day.  The following photo is my absolute favorite of the day:

The best part – the look on my face was an accident – I intended to have my eyes open and staring off into the distance, but I blinked!

I had originally intended to wear a different gown that day, but fate (and my very disorganized brain) was against me.  I’m working on new winter looks and had a brand new velvet underskirt and shrug that match a velvet corset – that I had misplaced.  After spending about half an hour searching, I gave up and looked for something different to wear.

(Incidentally, much later, I found it – WITH THE KITCHEN TOWELS. Absent minded much?)

I didn’t have anything else BRAND new that I wouldn’t be freezing my patooties off wearing.  I did have this cloak: 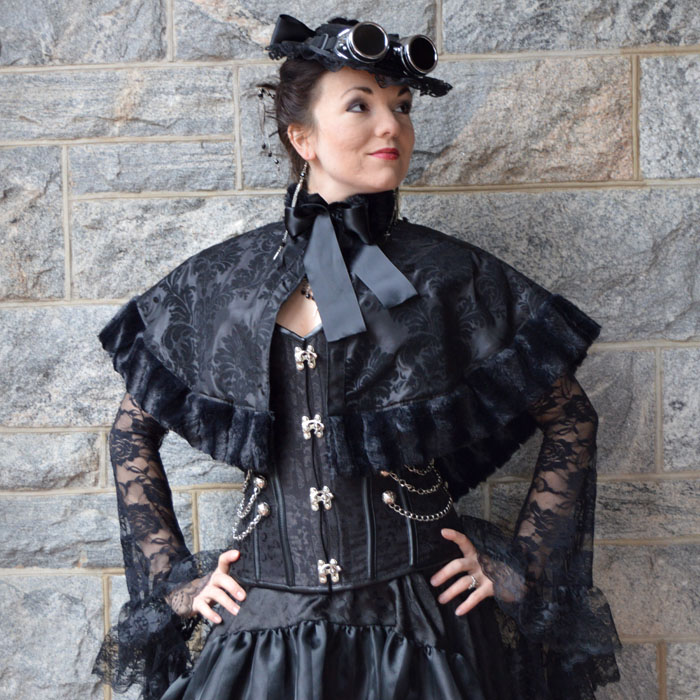 So I thought ok – what do I have that will match this cloak and at least has sleeves of some sort?? 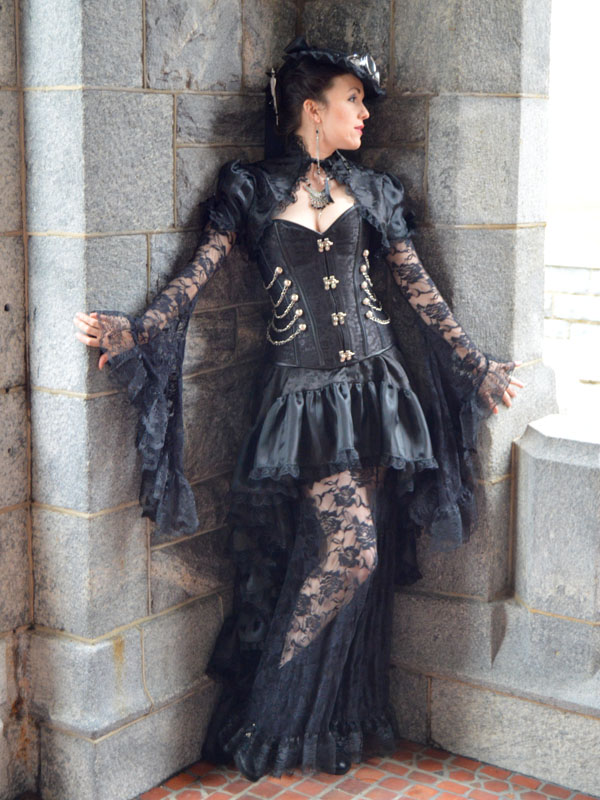 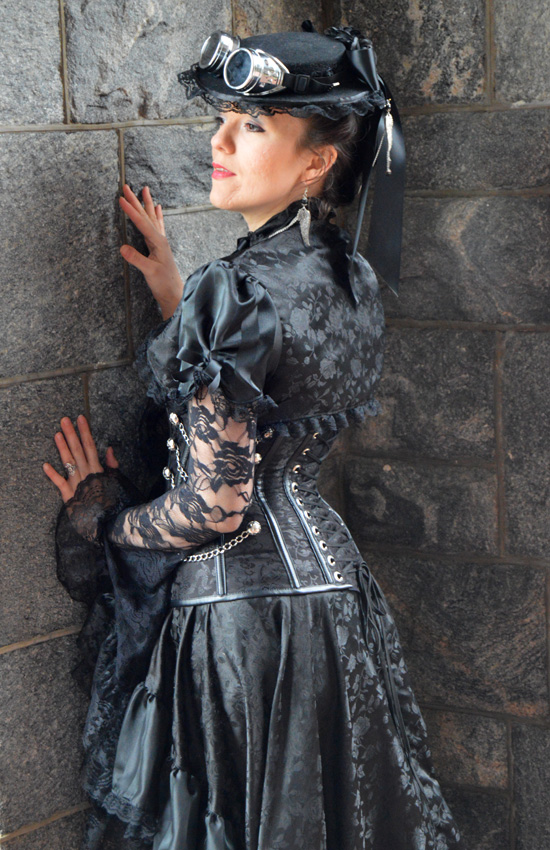 The shrug in these pics looks like a new design, but it isn’t!  If you wear a “La Rose Gothique” shrug underneath a “Belladonna” shrug that’s what it looks like!

The skirt is also two skirts layered, as in most of my designs.  I like having a WARDROBE rather than a few costumes – and having foundation pieces that can be worn with anything makes that possible. 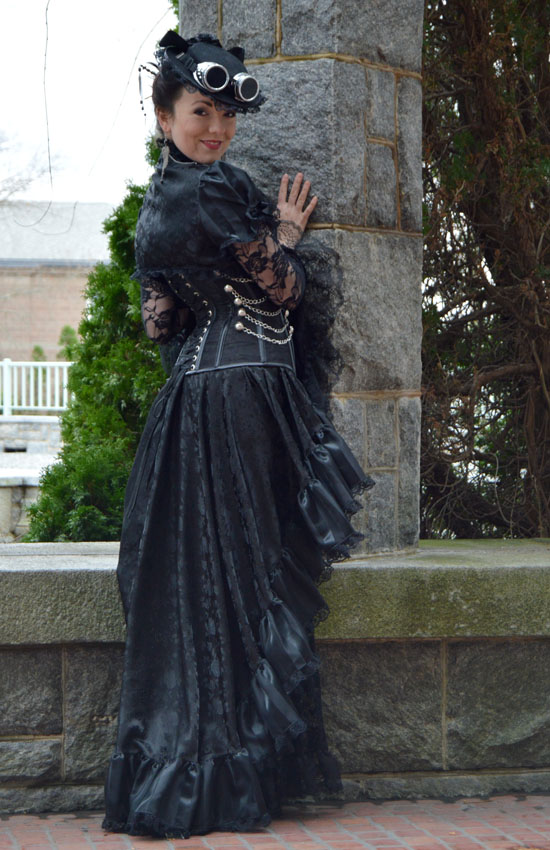 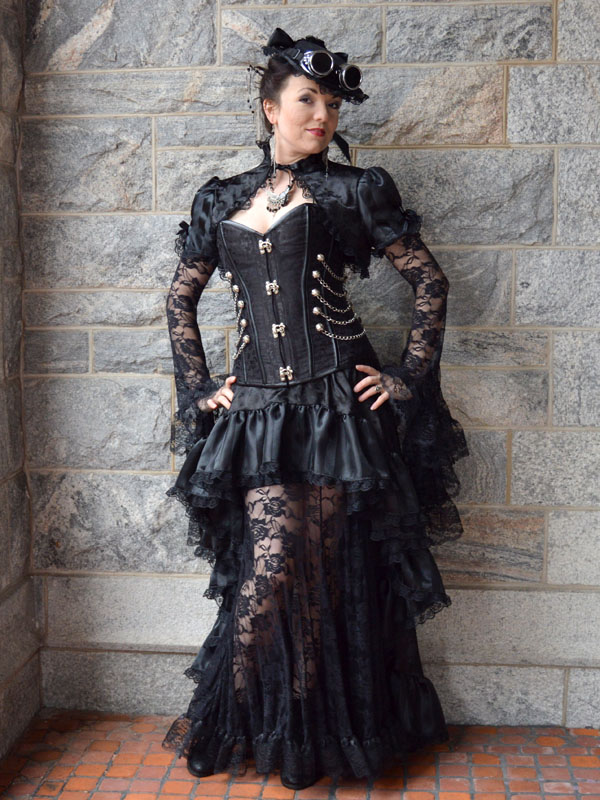 You may recognize this look – it’s practically identical to my “Imperial Belladonna” steampunk costume.  I’ve had several requests to sell that costume with an underskirt instead of leggings, and people always ask “will the belladonna skirt look alright with the lace underskirt?”

So I figured if I couldn’t find the parts for what I intended to wear that day, at least I’d get pictures of something practical.

The hat is a safety pin special – meaning I took a couple things I had and pinned them together for the look.

It’s a “Dark Delight Lolita Tilt Hat” with a pair of cheap-0 steampunk goggles (the ones you see attempting to overtake ebay searches at the moment) pinned to it!  Although I should note, if I wear this for real, I will either make a pair of smaller goggles, or get a pair of real vintage welding goggles, which also tend to be smaller.  I had to toss any picture where I was staring head on at the camera, because holy crap huge goggles on a delicate hat. 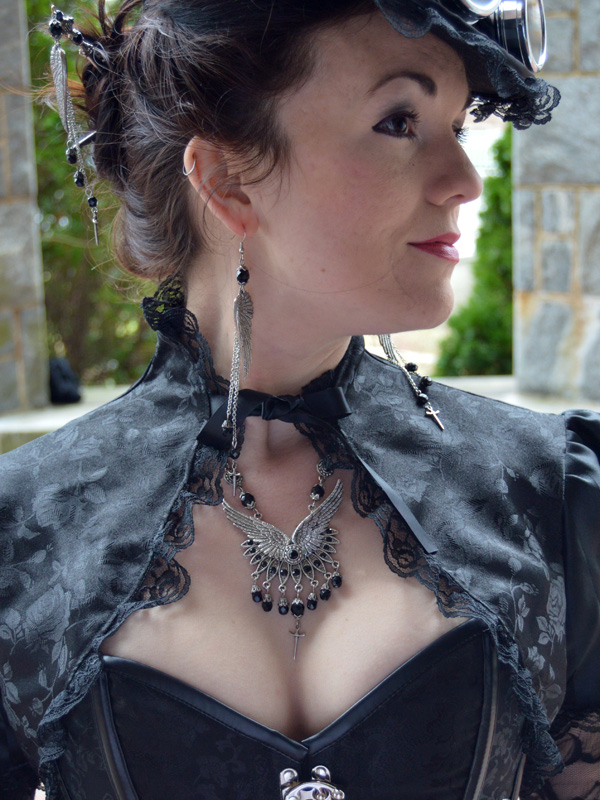 And my jewelry – don’t you love the jewelry? – is from Vixen’s Delight, as always.  The set is called “Fallen” and this is a perfect example of how well her jewelry lasts.  This is from Andrea’s personal collection, and it seems to be the piece most often grabbed since it’s a blend of all things gothy and steampunk that we love.  Usually one of us is wearing something that would like a touch of “gothic angel” so it’s been worn many many times.  It’s still silver and has lasted thru many shows, which is what happens when you use all steel rings and pins, and cast metal pretty parts.

And last but not least, how about a completely goofy pic? 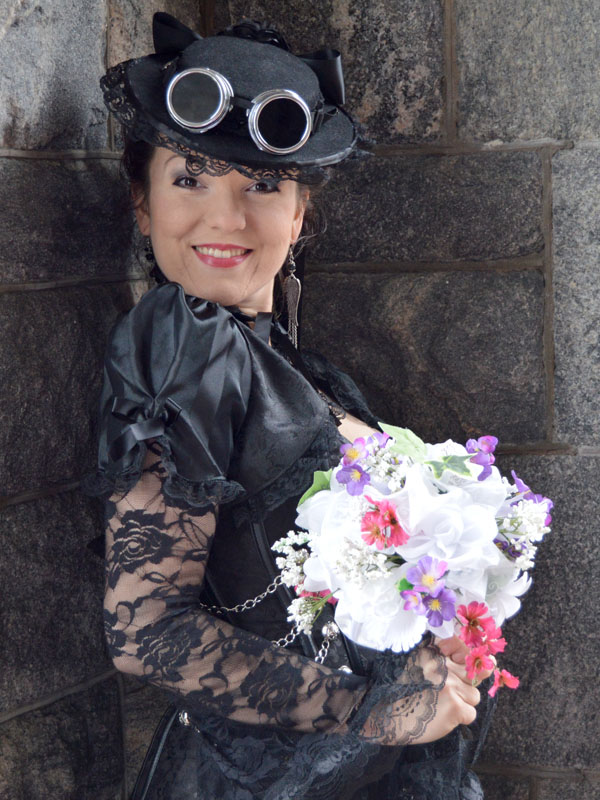 If you recall from my last post, Andrea was wearing an all white bridal outfit.  She had brought this bouquet for a prop, and since it looked totally goofy with my look, we snapped a pic just for fun.